For those of you who have yet to see the updates at flamesofwar.com, here is a picture of what I consider to be very, very exciting news: 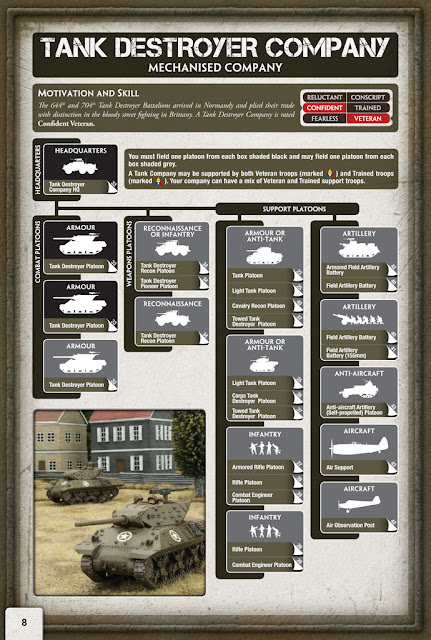 Yes, now we can see the force diagram that will be available in Blood, Guts and Glory.

I will say that I believe this will be a very popular list.  My first impressions:

5) IT IS NOT ALWAYS ATTACKS!!!  Think about this.  You are defender.  Put the Security Section in cover.  Let long range crazy shots come in - who cares!  When the enemy closes the range, pop goes the TDs.

And that last point in 5 above is the key - TDs should ALWAYS get an opening salvo / "alpha strike" into an enemy platoon with full RoF.  Everytime.  So for $64,000 and control of the board, name another platoon that can do this in FoW? Anyone??

V3 Hardback in my hands!

The Last Square in Madison just received their hardback edition V3 books this afternoon.  Wohoo!!
Posted by WEBGriffin at 4:32 PM No comments:

Played a great game last night with Joe.  We haven't played each other in a while, so it was good to get a "knock-down, drag out" fight under our belts.

We played V3 Cauldron.  Another friend of ours, Simon / Hedgehog posted on the FoW a thread about this mission.  I would suggest everyone head over there for a synopsis of some fairly strong feelings on the mission.  I will add my thougths at the end of the post (feel free to skip ahead of the short BatRep).

Since I am auto-attack, Joe was defending.

He put the 2 Lee Companies on the table, rest in Delayed Reserves.  I put 2 ARP on the board (mistake) and the Security Section of the TDs.

The first turn was slight movements from Joe and myself.  No shots, but I did get reserves (Shermans).

Turn two was more tactical movement for Joe, but he made a "boo boo" and put some Lees in the open for me.  On my half of the turn, I popped the TDs and moved the Shermans to take shots at the Lees.  Timely shooting / rolls and I gutted the Company pretty well.  He passed the motivation to hang around.

Turn three and Joe blasts two Hellcats.  He took pot shots at the ARP that I had moved out of holes to rush an objective.  The objectives don't go live until Turn 6, but I wanted to get the ARP on one and dig in.  I start a trend of poor rolling for infantry saves.  Plus I bone-head the movement and deployment of the ARP.  Dork.  In my end, I finish off the the first Lee company and start in on the other Lees.

Turn four and Joe gets Delayed Reserves - the Stuarts.  He brings them into the battle and helps the 2nd Lee company in finishing off the TDs.  He also blasts the ARP and assaults.  I can't stop them with the bazookas.  I have to fall back after the assault.  I try to blast the Stewies, but cannot force a morale test - came within one tank of doing so.

Turn 5 and Joe gets the rest of reserves.  SU-100s bail a Sherman.  The recon gets too aggressive and shoots at the last ARP platoon.  Stewies launch an assault (still can't stop it with 'zooks) and make the two ARPs leave the board.  My half of the turn, I try to force a Company Morale.  I kill a Stewie, but only kill and bail a recon unit.  Stewies fail morale, but the recon is not even forced.  We time out and Joe wins 4-3.

I won't get into the tactics of the game we played.  I could have doen things better, Joe regretted the placement of 3 Lees that basically gave away some GtG tanks.  I have to use the ARP smarter (still learning) and my choices for reserves were poor.

The mission.  Well, there seems to be some discussion about the attacker setting up a line to take out the defender's reserves when they come on the board.  In the event of an odd number of platoons, the attacker could wipe those platoons out, force the company morale check and win without taking an objective.  I did not think on that.  On the surface, it would work.  But I think this "tactic" is board dependent and list dependent.  But if you are defender, this tactic should be considered when you think about what you are putting into Reserves.  Being forewarned is being forearmed.
Posted by WEBGriffin at 10:24 AM No comments:

This list is getting some love lately!  I appreciate the comments on the previous TFA post.  I have spent the last several days reviewing the list, talking tactics and running the numbers.

This list is no longer viable in my opinion.

IT IS DOWN RIGHT NASTY!

But also understand this - it will only be viable for about 9 weeks.  Let's just say that when the first Bulge book comes out, a TD Company will be a part of the list.  Vets.  With Vet Armored Rifles in Support.  That is what I am reading on the blogs and hearing through the "grapevine."  So if TFA is nasty today, TD Company will be downright EVIL.  You see, in the TD Company, you will get 8 Hellcats.  But you can add a 3rd platoon- of Jacksons!  They will be trained, but who cares!  AT will either be 13 or 14.

As a US Armored player, this is awesome.  And I sit back, fold my arms behind my head and think about all those times my Shermans were obliterated by Panthers, Tigers, KT, IS-2s - heck - T-34s!  And I crack a smile thinking about 12 TD tanks spawning under 16" away.  With the Jacksons, you don't care if they are front armor shots.

4 TD with AT 13 (I still have trouble believing they will be AT 14) shooting at Vet Panthers (FA 10).  I will even give the Panthers concealment.  (quick side note - RT Panthers are coming!) 8 shots needing 5+ to hit.  Rounding up, 3 hits.  That will come out to be about 1 dead, 1 bailed.  And you usually come up against 3 Panthers.  If they are in the open, 4 hits - 2 dead with maybe a bail.  An American player has NEVER had this as an option.  Seriously, when you saw a German with Panthers and StuGs, you got sick to your stomach.  And what about a KT?  Now you can kill these things!

Yup.  Dead Panthers.  I like the sound of that!