Bill Wilcox did it again, but this time with TFA.

At my first US Nats, I ended up with Best American since Bill's win takes him out of the running for that award.

So TFA goes 1 and 2 for American lists.  Not too shabby amigos!

I will post a longer LW Nats article as it was a blast!  I met a bunch of people and reconnected with others.  I was even able to meet folks that I have been following on blogs or reading their posts over at the FoW Forums.

If you have not been following the posts by Eric Riha, you really need to do so.  They can be found at http://www.wwpd.net/.  I strongly encourage folks to read this stuff.  Yes, it is math.  But if you choose to ignore probabilites in this game, you will never get better.  Of course some people play enough that they simply learn the probabilites over time.

Based on Eric's posts and discussion of Expected Value (EV), I created a series of charts which identify the EV for various combinations of Armor Rating, Anti-Armor Rating - all with a Firepower of 3+ (the most common for tanks).  Feel free to copy! 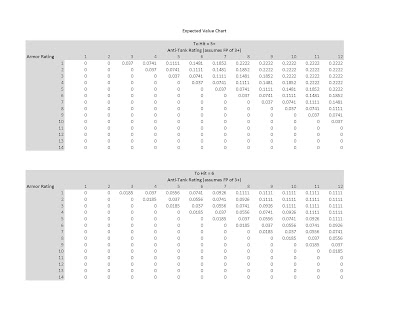 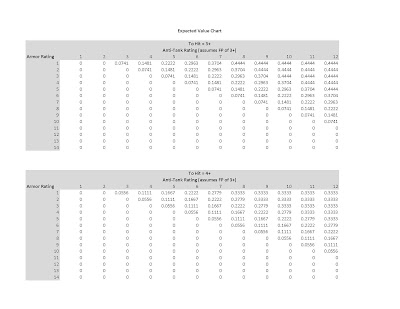 Posted by WEBGriffin at 8:11 AM No comments:

Task Froce A to LW Nats!

Let's get this straight - I am not that good at FoW!  I have just over two years under my belt, but my first "real" tournament was almost one year ago.  So I consider myself still to be new to the competitive scene!

But I do know how to build a list and how to run numbers.  And I know the rules.  And my very personal view is that V3 is the great equalizer right now.  People are still adjusting to the new rules, so there is an opportunity for newer players to make great strides in the game.

With that in mind, I long decided that I was going to take Task Force A to LW Nats.  If you have read my earlier posts on TFA, it shouldn't be a big surprise.  I have quite a few games under my belt and I can say that I really like playing with the list.  I can also say that my opponents start the game a bit off-guard because they just haven't seen the list before.

So, I have been practicing the list against Mike for a number of weeks.  We have run different missions and he has run a few different lists.  I have also played my "normal" games on Wednesday with US ARP, but really focused on the play of the TDs.  So while my game with the ARP may have been "poor", I was really concentrating on how the TDs performed.  And how Shermans performed with them.  This strategy goes back to my competitive golf days.  I used to go on the putting green and let people see me leaving my putts short.  This made them think I was "weaker" than I really was because I was purposefully leaving the putts short.  Same here.  In this game, it really helps if you can bluff your opponent into thinking you don't know how to play the game.  Ever see "White Men Can't Jump"?  Same idea.  Then about turn two or three, BAM!  They don't see it coming.  I like doing that.

Now this weekend is a "warm-up" tournament that Joe will be running in Madison.  After some thought and discussion, TFA will be there.  I figure more practice can't hurt or more to the point, the benefit of getting more games under my belt offsets any benefit to others in playing against TFA.

I tried several variations of the list, including bringing Priests, planes, Stuarts and Armored Rifles.  But I settled on the list above.  Now we can debate the ARP and Engineers (yes, Igor and others!!), but this list just comes out feeling "right."  More importantly, it plays "right."  My biggest concern will be dug-in infantry.  But I have been figuring out some tactics and listening to other players for advice.  We will see if it helps!

So there you go - my list.  Now we will see how it does this weekend!

Happy Easter to all!
Posted by WEBGriffin at 1:54 PM No comments: