If you have been reading my blog for a while, you know that I have a certain love for all things Tank Destroyer.  Now this post is not about my feelings over the rules and the power that TDs and multiple TDs bring to the game.  That is a different topic and I am not using this post to discuss that topic.  This post is about list construction using the rules as they exist today.

So with that in mind, here we go!

The key element to maximizing the power of the TDs is to bring more than one platoon to the table.  There are many options here:  Task Force A in Turning Tide, Rangers in Turning Tide (I believe), TD Company in Blood, Guts & Glory, Rifle Company in Devil's Charge and Cav Recon in Devil's Charge.  I might have missed one or two, but you get the idea.  Now if you want a discussion on TFA, look in my archives to March of 2012 and read those posts because...

When BG&G came out, I was all over the Tank Destroyer Company.  You can build a great list using that force - no doubt.  But when DC came out, a friend let me on to the Cav Recon list as a possibility.  After looking into the details, I am convinced this is a great list.

Rather than going through my thoughts, I will simply show the list and discuss each platoon and the reasoning around my choice.  And it will be done with an eye towards tournament play.

Here is a solid iteration of the Cav Recon Company from DC: 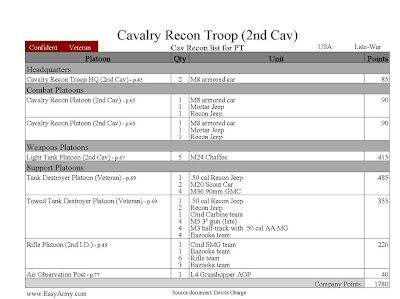 Let's start with the "core" of the list, which are the Combat Platoons.  You have to bring two platoons, just like almost every list in the game.  To maximize the points in support, choose the smallest platoons possible.  So with a single patrol in each platoon and the HQ, you have spent 265 points.  That leaves 1,515 out of 1,780 yet to spend.  And this is a huge benefit!  For the math fans out there, I have just spent 15% of my total points to fill out the diagram of what I have to bring.  Amazing!  And this is a key for building a nasty, tournament worthy list.

Next are the TDs.  You have the ability to bring two platoons of TDs with this list.  To bring anything other than two is just crazy talk!  So which do you bring?  One word - Jacksons.  I love the M10s and M18s, but you have to bring M36 Jacksons.  AT 14 is necessary in LW.  Plus you get Detroit's Finest and you get Front Armor of 4.  One thing that killed me in a game at LW Nats was Ed Harding's AA guns.  Those are nasty against Hellcats.  In fact, more Hellcats were killed by AA than by Panzer IVs in that game.  So Jacksons get a better gun, 14" movement and enough armor to ward off machine gun fire, HMGs, .50cals (think Blue on Blue) and some AA.  Do you go Vet or Trained?  The answer depends on points and play style.  Personally, I am going Vet.  Why?  Well, you will whiff on some shots - trust me.  So what is the best defense in that situation?  Easy - don't get hit with the shots coming back!  Assuming you are in terrain, you will be 5+ to hit.  And that is better than 4!  8 shots coming back will hit you between two and three times at Vet.  At Trained, you are getting hit four times.  You want Vet.

Now the second TD platoon will be Towed, since that is all that is offered in the diagram.  But fear not!  You must add in the bazzokas and the halftracks to make a mobile unit.  Plus, with 5 infantry stands (4 being bazookas) that are also recon running around the board, this is too good to pass up.  You need to go after infantry - .50cal them to death.  Armor - guns and bazookas to clean up the mess via shooting and assaults.  And you can leave the guns behind if necessary and take the infantry and tracks to go raise hell on the table! Now, Vet or Trained?  I still like Vet here because I need the Vet roll on skill checks.  Lift GtG with bazookas?  Yes, with a 3+.  Need to hit in assaults?  Yes, with a 3+.  So make the investment in Vet.

So we are now at 4 platoons and have chewed up 1,105 points.  Yes, the TDs are expensive but well worth it.  What do we do next?

Grab an infantry platoon.  You can choose Vet or Trained Rifles, Trained ARP or Vet Engineers.  Now I love Engineers.  I use them in my TFA list and they work really well, provided you jack them up with the bazookas and supply trucks.  With TFA, you can even add a Sherman Dozer, but not here.  The knee jerk is to go with the Trained ARP.  Now this would work and can work in this list if you need points, but the sleeper is the Vet Rifle Platoon (2 ID).  Take that and either go SMG for all or go with max bazookas.  Both have their place.  But remember that you will get the 2 ID benefit of Moving At The Double through Difficult Terrain.  Yes, 16" of Vet, nasty, bazooka laden Riflemen goodness!  This will help when you have to attack an Infantry Company or another Mech list.

Next, you need one more trick up your sleeve.  You need smoke.  It would also help to have more armor.  And fast armor at that.  So go grab Chaffees!!  Your 6th platoon will be 5 Chaffees.  Now I know they cost about the same as a Sherman.  But the real value with the Chaffees is that they come from a different box in the force diagram.  They are not a Tank Platoon, they are a Light Tank Platoon.  And you can get this in the Cav Recon list while still getting two TD platoons.  So you buy a Stuart with a Sherman gun.  And with Stabilizers...  and with Smoke...  This is the final piece.  What you will do is smoke those units that did not die from TD shots.  Or use them to get side shots on high armor targets, like Panthers...

And with the 40pts you have left, go grab an AOP.  Use it to prevent an ambush right where you don't want it to appear.


And that makes for a killer list...
Posted by WEBGriffin at 9:31 AM 3 comments: