Another month goes by with a single post.  Wow.  So here is my FoW update to cover the last 4 to six weeks:

This past weekend was RockCon, which is a mid-sized convention held in Rockford, IL.  My LGS is a big supporter, so the guys try to either run events, participate in events or just help out where and when we can.  This year, Joe ran a Bulge game (not a tournament) on Friday night and a 1,780 LW Normandy Themed Tournament on Saturday.  Let me start with Friday.

If you want details, you can see the details at FoW forums under the Conventions Thread.  Basically, the Allies got 1,000 points and the Germans got 2,000.  However, if anyone ran a list out of the three Bulge books, then you got an extra 100 points.  So I created three lists that all saw the table at 1,100.  They were a 2nd Cav Recon list, a 2 ID list and a Combat Engineer list.  We ended up having a Ranger list from Normandy (Igor from Poland was in the house again this year!!), a Para list from Nuts! and Armored Rifles.  We went up against 12,000+ points of German nasties!  The boards were laid out in a giant "H" shape, with each verticle being 24' long and the connector part being 6' long.  Bastogne was located in the vertical connector - right in the middle.  So the Germans could come on at any of the 4 "ends" of the H shape.  Roads were normal, off road was slow going and concealed (very light woods) but did not block LoS.  There were also 4 random events for each section of the ends and the middle connector.  Here is a map: 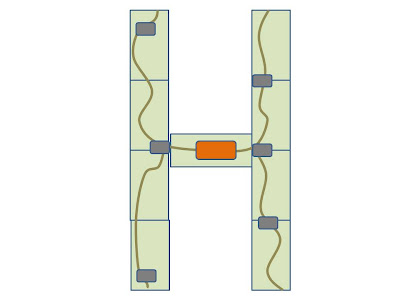 Bastogne is Orange and the grey boxes were towns along the way.  Based on a random event, my 2nd Cav Recon popped up in the lower left corner of the map above - facing Panthers, Stugs, Grens - Oh My!  Rangers were in the upper left, Engineers popped on the upper right section and Rifles in the lower right.  2 ID was deployed at the start of the game split between the two towns to the left and right of Bastogne.  And of course, our Paras were defending Bastogne!!

After 4+ hours of bloodbath, my Cav Recon were destroyed, but they fought valiantly and took two German companies with them - one by destruction and the other by "no way in heck we are getting to Bastogne so we run!!"  All told, 1,100 Cav Recon points destroyed 2 Panther Platoons of 4 Panthers, 1 Panther Platoon of 3 Panthers, 1 StuG Platoon with 3 StuGs and a Panther 1iC - with that kill coming from a M8 Greyhound!!  But my Jacksons, Towed TDs, 2 Recon Patrols, 2 ID platoon and another M10 TD platoon from the 2 ID company down the road all met a glorious end for the Allies!  The other areas were just as bloody, but the Germans did make it much further down the road than in my sector.  However, in the end Bastogne held as the Germans forces that finally got there were so depleted that they could not move the Paras!

It was a great time and the second time in three years Joe has run this game.  It takes a lot of work and prep.  I do think the next time we run it, we will make movement a little easier as the Germans have a tough time getting down the roads.

Saturday saw 1,780 in LW Normandy - you could only field lists out of Turning Tide and Earth & Steel.  I ran the Cromwell 7th AD list - yes, not TFA!  24 players started the day ready to fight.  I started the day going up against James (Chaos45) and his very good list of CT guns, arty and grens with CV Marders, 8-Rads and StuGs.  James ended up spanking me 6-1 and was a great sport because for a bit he ended up playing against himself as work called and had issues.  So after the game, I talked to Joe and relegated myself to the bottom and helped teach some newer players.  Plus I kept getting calls from work and it was not fair to my opponents.  So I had a fun game with Nick, who was playing a Panzer IV company.  Congrats to Panzer Dan for the victory and to all the other players.  It was great to see everyone.

So now I can prepare for the upcoming Fall-In Doubles Tournament and a MW Double Tournament in Madison next month!

I will also be finishing up some buildings and I will be placing an order for more Sentinel buildings now that they have released the Row Houses.  And yes, the church will be mine too!

And I also used my Lucage from Luke Melia on Saturday (although we played them as hedges and not straight up Bocage).  They looked great and we got a lot of compliments!
Posted by WEBGriffin at 9:33 AM 2 comments: