Pictures from Igor and personal note at the bottom!

To recap - we played teams, LW 1,750 each in preparation for an upcoming tournament.  We ended up playing Breakthrough.  We modified the table size to make it a bit more appealing for the size of the teams.  We did decide that each player would be treated separately - each had their own reserve rolls, etc.  And Joe would not let our AOPs range in for each other!  Hey, I had to try.  In the end, Wisconsin and Poland defeated Wisconsin and Wisconsin (ok, we timed out, but it was a done deal). 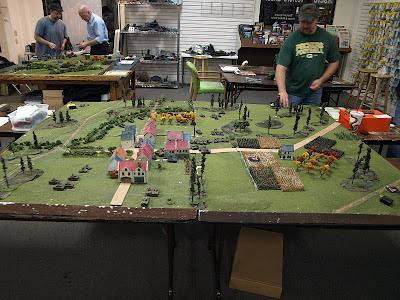 End of USA Turn 1 -  Attackers (USA) deployed in the upper left corner.  Objectives are on lower right corner.  One objective is located in the wheat field just below the road.  The other objective is far lower right corner.  Igor's Hellcats made a move to get side shots on the Panthers (lower left).  In the middle of the board is the Stuart horde that just eliminated the Pak 40s in the trees to the right of the horde.  Hard to see, but there are 3 more Panthers lurking in the village.  Igor's 2nd TD platoon is on the road, just to the right of the village - also looking for side shots on Panthers.  Our strategy was to run the Stuarts right through the middle of the table and sit them on the wheat field objective.  If necessary (depending on reserves), we would peel off some Stuarts to get to the second objective.  Mike (in that hideous Packers shirt) is standing near his Nebs. 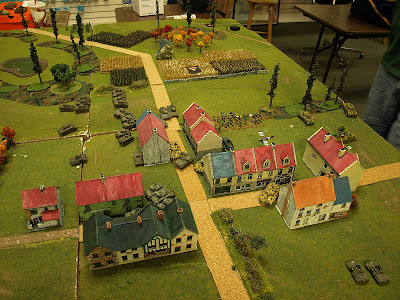 Closer look of the tank killing zone near the village.  76mm enter the village to play with the Panthers.  Here you can see the German Grens sitting between the trees on the right and the buildings.  Tactically, I needed to me more careful with the Grens.  They lit up 2 76mm Shermans with shrecks and Mike rolled a 5 and 6 on his Firepower tests.  Bye bye 2 76mm.  Special recognition to Joe / Keamma and Catherine (Mrs. Keamma) - they painted the village buildings.  You can see them in the terrain forum section at FoW.  Catherine did the house located at the top of the picture.  The ivy she put on the side is fantastic.  She has offered to paint some for me!!  Wohoo!! 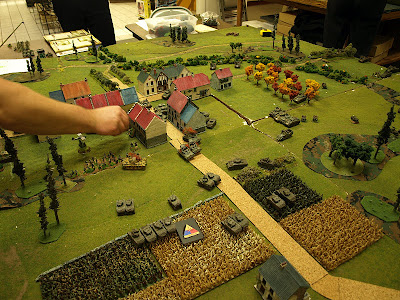 Turn 3 now - The Stuarts have secured the wheat field objective.  Now they have to live for a few more turns.  Stuarts killed a Panther with a side shot.  Yes, I yelled STUART POWER in homage to the WWPD guys.  3 Hellcats (look a lot like M10s!!) brewed up nicely.  My 76mm are about to be wiped out (they ran).  But 4 Shermans are heading over to make sure the Panthers die.  Turns out Igor got his reserves, came on and machine gunned the FJ platoon in the open.  Nothing like rolling 17 MG dice at open ground infantry.

We ended after 4 turns - we really ran out of time with all the "getting to know you" stuff that went on.  Many thanks to Igor for snapping the pictures.

On a very personal note and I hope you all make it down this far on the blog.  This is the second time I have met someone through FoW while working / visiting another country.  This April I met Tim / Bosje in Arnhem and had a blast.  I wish I could have dropped dice with him - he even asked!! - but with my family and a tight schedule, I just couldn't make it happen.  But Tim and the others at the great shop in Arnhem were wonderful to me and my family!  I am very honored to be able to repay the favor and host Igor.  I am looking forward to the drive to Rockford with him and spending a great day with my son and guest from Poland.  I emplore everyone to take the opportunity if it arises and get to know visitors through FoW.  Igor has already asked us if we plan on playing in the European Team Tournament next year - which just happens to be in Poland.  Joe!?!?!?!?!?!?!?  I see it now - CHEESE RULES POLAND!!!  Wow, that sounds like another WWPD Dispatch!!
Posted by WEBGriffin at 6:49 AM